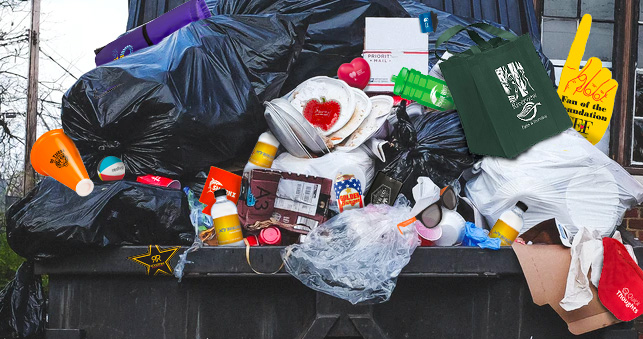 “Brand Fill” is just one of the many terms for cheap, useless, and unwanted merch that is given out to people and is immediately thrown away.  From a marketing perspective, you want to get as much visibility on your brand/promotion as possible, so no one wants their marketing to end up in the trash.  And yet, I can think of countless times I end up sorting through a trade show bag to figure out what I’m going to keep and what I’m going to throw away.  What separates a good promotional product from a cheap and worthless one?  To answer that I believe there are several factors that make promotional products stand out and endure.

Hopefully, you will use this list as a reference point for selecting your next promotional item.  I would make the case that the exact same promotional item could be kept forever or be thrown away depending on how you use them.  With that in mind, when you can, think beyond the price and select products that promote your brand in such a way that they will stay with your customers.  Build your marketing for something bigger than to just get into someone’s hands and for a purpose so they don’t get wasted.